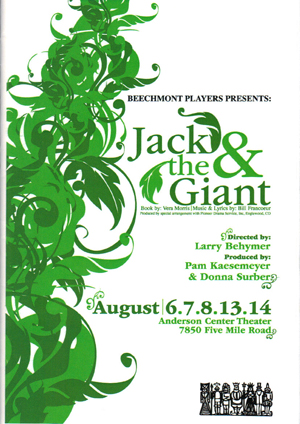 This charming musical version of Benjamin Tabart’s classic English folk tale, “The History of Jack Spriggins and the Enchanted Bean” will surely delight your audience. The giant is making life pretty miserable for Jack, his mother and the entire kingdom. Jack is even forced to sell his beloved dancing cow for magic beans. And where does Jack go? That’s right! Jack goes up the beanstalk and into the castle where he not only fights Gogmagog, the giant, but the malicious Troll as well.

By the end of this special tale, the cow is returned, the chicken learns how to lay golden eggs and the good life returns to the kingdom. This show is spiced with a variety of tunes like “Good Things are Bound to Happen,” the Giant’s “Fee Fi Fo Fum” or the company’s toe-tapping “Run, Jack, Run,” that will have adults and children alike humming.