How much Hitchcock can you pack into one comedy? 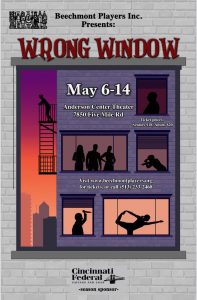 Van Zandt & Milmore pay tribute to Master of Horror Alfred Hitchcock, with this comedy whodunit. Off-and-on New York couple Marnie and Jeff enter an even more complicated phase of their relationship when they think they spy their cross-courtyard neighbor do away with his wife. After they draw their torn curtain, the lady vanishes, and suspicion places murder beyond a shadow of a doubt. The bumbling witnesses sneak into their neighbor’s apartment – 39 steps away – and the fun begins. Among multiple door-slammings, body-snatchings, and a frantic flashlight chase scene, two questions remain: Who killed Lila Larswald? And… if she’s not dead…then who is? The crazy farce plays out on a shadow-box set that allows the audience to be present in one apartment, while viewing the action in its mirror-image neighboring unit across the way.

A happy housewife named Marsha (addicted to reading murder mysteries) overhears her husband discussing her upcoming surprise birthday party. But to her ears, it sounds like they are planning to murder her!